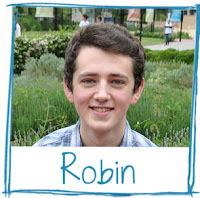 The build-up to the Edinburgh Festival Fringe is continuing, and the entire event is tantalisingly close. In just a couple of weeks we’ll have settled in our hostel and performed to an international audience for the very first time, and we’ll be huddled together eagerly anticipating the first reviews – fingers crossed they’ll be positive!
But even if they’re not, the experience of rehearsing for the show has already been terrific and, although a drain on the wallet – at this rate I’m going to be eating little other than a lot of beans and a lot of toast next year – I can honestly say I’ve never been as excited by the prospect of a summer trip. It promises to be the stuff of lifelong memories!
It feels like we, as a cast and crew travelling under the umbrella of “Gone Rogue Productions”, are set to go on the adventure of a lifetime, and goodness knows what will happen when we’re up there as we flyer, perform, watch tonnes of other theatre, musicals and comedy, before relaxing and enjoying the festivities on offer in the city – every day! Sleep is definitely not on the agenda.
The prospect of this trip, as always, is made all the better by the people I’ll be sharing it with. With some hilarious, interesting and inspiring people, rehearsals have been fun affairs, even as they’ve grown in intensity towards the end of the month (although this is largely down to our difficulties in learning lines as a cast)! It’s been a wholly enjoyable time as we’ve also been spending a good deal of time together outside of the rehearsal environment across the course of the month.
The social scene of University is one of my favourite things about my life at Southampton, and reading Jo’s and Flo’s posts about making the most of your time here, it’s definitely something I’ll continue to try to take advantage of as much as possible – when my degree programme allows me to, of course! Ultimately I recognise it’s important not to lose sight of the primary purpose of my stay here, so there are evenings when it’s necessary to send apologies and stay at the desk (usually the evening before a deadline!). And as always with University, a level of freedom exists which permits you to get involved as and when you want to, so I never find myself under pressure to attend events rather than put in the hours with the books.
Furthermore, as someone who, when I moved to Southampton, was quite an introverted individual and found it difficult to meet people, I’ve loved how open and inviting students here really are – just by expressing your interest in things, opportunities arise to meet new like-minded people, go along to new events and engage in new ways . For example, after going along to only one welcome meeting, that of the Students’ Union’s television station (SUSUtv), during my Freshers’ week, and despite being petrified the entire time, I found myself invited to two birthday parties and signed up to be part of the crew for a live online broadcast the week afterwards – talk about straight in at the deep end!
And, contrary to popular belief, the social scene at University doesn’t revolve solely around alcohol. It’s a common perception that every social event involves drinking and you can’t enjoy yourself without it, but from my experience, it’s really down to your own preferences – whatever your choices, you find that people will respect them, in keeping with the eclectic nature of the student body itself. Indeed, some of my favourite society socials have been sober ones, so alcohol is anything but a necessity.
So here’s just a small selection of the great days and nights out I’ve experienced during my two years here already, with plenty more surely to follow:
Battle royale

Some things never get old!
During the course of one post-rehearsal meet-up this month, we decided to get together a foam dart armoury, before unleashing all-out foam war on one another – well, they say you should never lose touch with your inner child! Variations on this which I’ve attended have also included many a snowball fight on the Southampton Common (a field near campus) in the winter and, in brighter climes, an intense on-campus pillow fight flash mob. A great way to blow off some steam, and all in the name of fun!
Movie nights 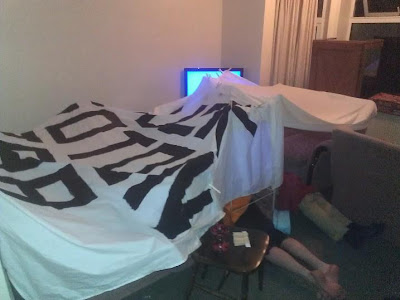 A recent film marathon led to a sleepover, so naturally we built a fort to watch them in!
Sometimes it’s nice just to relax with friends and housemates with a good film or two… or, from time to time, ten! Popular movie night themes tend to remain rooted in all things Disney, Harry Potteror Lord of the Rings but, if you’re feeling particularly adventurous (or ready to forfeit proper rest), extended marathons are a common occurrence in houses or at events hosted by our very own cinema, Union Films. Indeed, last year’s James Bond all-nighter was quite something and sent many to sleep earlier than planned; personally I somehow made it through, but the following day was extremely unproductive!
Beaches

Given the great weather of late, it seemed wrong not to take advantage of it, hence a last-minute trip to the beaches of Bournemouth one day to bathe in the sun, sea and sand! With ice-creams and beach football on the agenda, as well as a classic sand burial of one cast member, Luke, we all had a great time and, provided the sunshine returns, we’ll be sure to head back there again soon.
Meals out 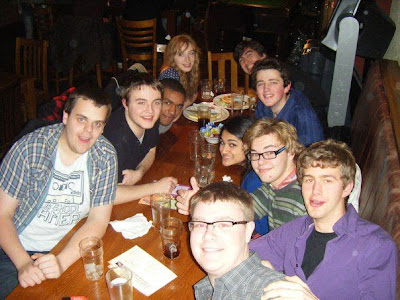 There are many great places to grab a meal in Southampton, and enjoy fine food and company.
A relaxed meal out in one of the many local eateries, either on-campus or nearby, is always a nice way to have a good time and share some terrific food. Typically with Performing Arts this ends with a buffet of some description, so we always make sure to get our money’s worth! Look out for these particularly around the end of semesters, when everybody’s too tired to do anything else!
Fancy dress 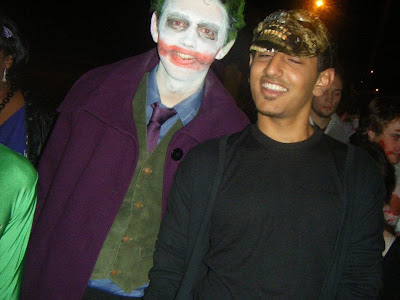 You can always guarantee Halloween will require a costume of some description!
The absolute staple of the University social calendar, fancy dress events are everywhere. It’s always a great laugh and a good opportunity to show off your creativity – or not, if you’d prefer! I somehow have managed to get by so far with only two or three costumes in my wardrobe thanks largely to the well-stocked fancy dress shops around, so last-minute hiring is an option. But there’s always an excuse to bring out a costume around the corner (particularly during Freshers’ week), so I’ve found it’s a good idea to have a back-up available in addition.
Day trips to the city

I’ve already mentioned our recent trip to the beach, but I’ve also had some wonderful days out in the city of Southampton itself with friends, catching the latest films at the cinema, doing a bit of shopping (games and DVDs, of course!) or seeing the mighty Southampton FC in Premier League action.
The Students’ Union 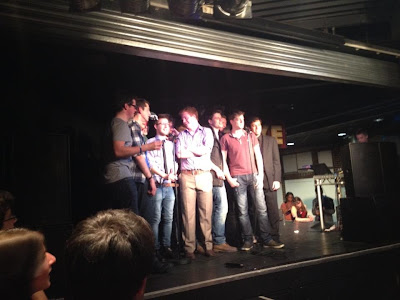 With karaoke, it’s safer to stick to being in a group!
In addition to the plentiful entertainment on offer through Union Films, the Students’ Union also hosts a popular weekly event in its swish Bridge Bar, the “Quiz & Curry”, which is always a great way to stretch your general knowledge whilst enjoying great food at the same time! On another night, they also run karaoke sessions which usually help to get everybody involved in singing a classic or two, although I’m now more wary after I was, on one occasion, somehow roped into performing a rap, which was apparently a sight to behold!
A night in bed

For those times when things are getting a little too much on top of you, or all you crave is the comfort of a pillow round your head, I can heartily recommend an early night in bed (which for me still seems to end at about midnight!). Stick the television on or get through a few chapters, recuperate in tranquillity, and find yourself fresh and ready to take on a brand new day with renewed vigour. As someone who acts the eternal grouch when tired out, sometimes it’s the only way!
A night at the theatre

Finally, as a tremendously biased individual, what better way to enjoy an evening than by supporting your fellow students in a theatre or concert hall nearby at discount prices? The quality of the Performing Arts’ societies here, not only theatrical but also musical and dance-based, is remarkable, with many performers being locally recognised and embellished with awards for their efforts, so you’re always sure to be entertained.
Indeed, if you’re looking for some entertainment this weekend, look no further – for the previews of the show that we’re taking up to Edinburgh will be showing at the Annex Theatre on campus. We’d greatly appreciate any feedback you might have for the show, Hanging Bruce-Howard, a raucous farcical comedy suitable for all audiences about a past-his-peak and heavily hungover actor’s efforts to get his life back on track, so please do come along, and help us to fine-tune a production we’ve had the times of our lives with!

Gone Rogue Production’s Hanging Bruce-Howard previews at the Annex Theatre, Highfield Campus, on Friday 26 (7.30pm) and Saturday 27 (1.30pm & 7.30pm) July, before running at the Edinburgh Festival Fringe throughout August. Tickets are available on the door, and all feedback would be hugely appreciated to help us to improve the show.
We look forward to welcoming you there!
Robin