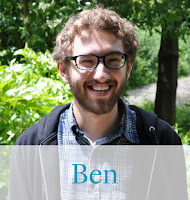 It comes as no real surprise that now we’re somehow already three weeks into term, things are starting to heat up. Every single time anybody, staff or student, asks me how I am, I end up replying with just one word: busy. And right now, I really mean it, for a whole number of reasons.

I should probably point out now, before we get any further, that I am very much one of those people that enjoys being busy. I actively seek it out and thrive on the very act of being busy. Not everyone’s university life will be this hectic; that’s the beauty of your time here, it’s exactly what you make of it and if you don’t enjoy that sort of thing, you really don’t have to follow such a path.

But for those who enjoy wrapping themselves up in as many activities as humanly possible…well, this is your time to shine.

As my last post will have no doubt indicated, lectures are now in full swing – all of my four modules (dissertation included) are well off the ground and the corresponding reading/writing/doodling is ticking away nicely. Thus, in a dramatic turn of events, I have well and truly found my feet with work. Everything else however, is a little more up in the air.

This past week has seen me broaden my horizons further and take on an exciting new project in the form of a Surge Radio show. Having conquered print and visual media, radio seemed like the next logical step. With the University’s award-winning student radio station attracting attention from BBC hosts Chris Stark and Scott Mills last week, it seemed like the perfect time to get involved. So, our SUSUtv-lead film opinion show ‘Reel Opinions’ made the jump from the screen to the airwaves, and despite a few technical mishaps (soon to be ironed out), playing music and chatting live on air was a surprisingly exhilarating experience.

So much so, in fact, that it’s about to become a regular occurrence; make sure to tune into Surge Radio at 8pm every Tuesday to hear yours truly playing some of the best music film soundtracks have to offer! 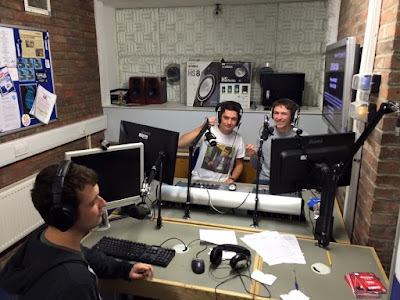 The Reel Opinions team feeling at home in the Surge Radio studio.

Now drifting back to my first love of print media; the past few weeks in fact have seen some interesting and exciting developments. Back at the University’s own student entertainment magazine, The Edge, we’ve been working hard on gathering together the designs for our future print issues, whilst the second of the year has finally arrived in all its glossy glory.

Our first printed magazine of the year flew off the shelves during the Bunfight and the Freshers’ fayre – so much so in fact that we don’t have a single copy left – and we’re hoping for equally great things from this latest effort. Wrestling with Adobe InDesign for many, many hours is definitely worth it when this is the end product!

The cherry on the cake, however, is something that has been stealing almost every free hour of time I’ve had since late September. Yes, in spite of warring lectures and design deadlines, the last month or so has been largely populated by trips into our nation’s capital in order to cover the 2015 BFI London Film Festival for The Edge.

One of the many perks of being the magazine’s Film Editor is handling press contacts, and this year we were granted an all-access press pass to all of the films screening as part of the festival, meaning I’ve been to a lot of free screenings, and have been writing a lot of corresponding reviews. It’s a pretty hefty undertaking, and it has meant cramming in work at every available opportunity (even whilst standing up on trains), but that’s all part of the fun. 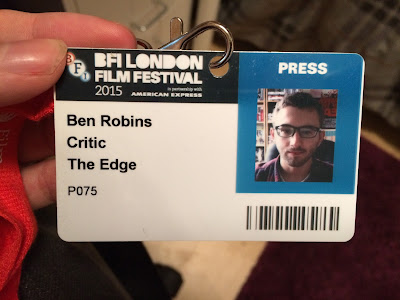 My press badge for the festival – my most valued possession.

After all, this is what University has really been about for me recently; juggling responsibilities and balancing the fun. There are so many incredible opportunities being offered up by the University, and with this being my (deep breath) final year here, it seems only sensible to embrace as many of them as physically possible. I’m sure that soon enough I’ll have a bit of a rest – the festival comes to an end this weekend so there’s plenty of sleep scheduled for then – but until then I’m still firing on all cylinders, and loving every minute.