KnowledgeNow and the major clean up operation – Week 8

As the buzz of having such a successful meeting last Friday wore off, the reality of turning a mock-up into a fully functional project started to set in. Almost the very first thing I did on Monday was create a code map from Visual Studio for the project. Trying to explain the connections between classes and functions to other members of the team showed me just how little I understood my own work. This was a jumble of lines from tutorials and stack overflow articles that were somehow leaning against each other in such a way that they didn’t crumble to the ground, and in the relatively safe and stable environment of short presentations that was fine, but the real world wouldn’t go so easy on my code so something had to change. 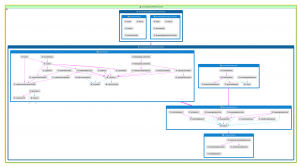 The code map that was generated is pictured here, not for anyone to analyse and understand but more to illustrate what a large amount of code needed changing. Attempting to write tests for this mess before digging in and moving things around, I found that badly structured code is naturally harder to test than clean code. The terrible irony in this is the fact that the code in most need to thorough tests is the hardest to write them for. A lot of my classes got restructured and refactored without any underlying tests, we just relied on the fact that we could revert to an older version if anything went terribly wrong, and then we wrote tests for the cleaner code afterwards.

The seemingly insurmountable hill has certainly been an uphill battle, but it’s actually been quite fun at times. The satisfaction of taking something messy and working at it like clay until it’s something clean and logical can’t be underestimated. We’re at the point now where the structure is actually making sense, some tests have been written and a bunch of empty test cases have been set up ready to be filled in. Soon, I can turn my attention to the requested changes to the system and features I hadn’t included in the original mock-up.

Profiles.soton has also been going along in the background. I attended TAG on Monday, a relatively frustrating experience at first, being told we hadn’t planned this well enough of done a vigorous enough requirements capture. The meeting soon got back to the original purpose though, and architecture options were talked about. Seeing documents I’d created on the TV at the front of the meeting room and having people analysing them there in front of me was a little nerve wracking, but it was really interesting to hear what people thought of the options. My favourite option, of adding everything into the Active Directory database and encouraging people to use that as their go to for information on users, was immediately discarded. My understanding of the purpose of Active Directory was clearly a little off – it seems it’s designed to be a very slim database only used for information such as roles and permissions. The committee seemed to quite like my second favourite option of the three, adding this information on top of IDM and reading it straight out of that system, rather than sending it downstream to Active Directory.

We decided to go away, do some more research into existing profiles systems, and will return next week to present our ideas again. I spent a little bit of time investigating existing profiles systems at the university such as efolio, pure, sharepoint, and even blackboard. None of them quite meet the requirements we’ve gathered, but the idea of building another profiles system on top of the large number the university are using without offering some kind of consolidation across the various platforms didn’t seem right. The plan now is to provide information to these systems and have a central system for updating the information, disabling any editing in the other systems being used. This allows current users of these systems to still display their information there, but centralises the process of updating it, ruling out any chance of discrepancies between systems.

Once I’ve finished working on KnowledgeNow, I’ll be helping with the development of profiles.soton, so it’s been good to keep up to date on what decisions are being made about it.

This work is licensed under a Creative Commons Attribution 2.0 UK: England & Wales License.