Hilary and John live in Hampshire, have been married for 32 years and have two sons. Sadly, cancer struck twice in their family in the same year when both Hilary and John were diagnosed with advanced stages of melanoma and lymphoma respectively.

Hilary was initially diagnosed in 2007 when she noticed what looked like a large ‘spot’ on her arm.  The GP decided it was best to remove it but, following surgery, Hilary found out she had the first stages of melanoma (a type of skin cancer that can spread to other organs in the body).  “I was completely shocked by the diagnosis of melanoma,” remembers Hilary, “I just thought it was a simple spot.  It was a frightening time as I feared the worst.” 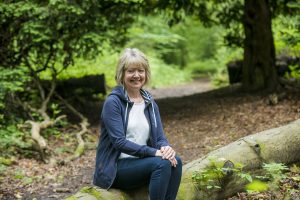 During surgery at Southampton, more cancerous cells were discovered in Hilary’s lymph nodes. Removing them seemed to address the problem. However, four years later, in 2011, things started to get worse and a CT Scan revealed the melanoma had come back and was now at stage four (an advanced stage).

Hilary had chemotherapy which initially seemed to work. But, unfortunately, after just a few months, it stopped working.

I remember finding out my chemotherapy hadn’t worked.  It was a rock-bottom day. How could this happen to both of us?

Coincidentally and devastatingly, this was just a few months after Hilary’s husband, John, was diagnosed with non-Hodgkin lymphoma (cancer of the lymphatic system).

In March 2012, Hilary and John both found themselves in adjacent wards at University Hospital Southampton.  “Many of the staff thought an in-hospital romance was blossoming until they realised we were husband and wife!” recalls Hilary, able to laugh about it now. “John came to visit me in his pyjamas and sat by my bed!” 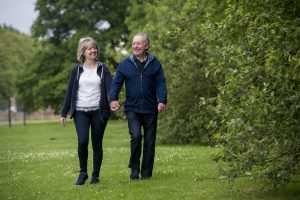 However, under the care of Christian Ottensmeier, Professor of Experimental Cancer Medicine at the University of Southampton, Hilary was given new hope, in the form of immunotherapy drug ipilimumab, which she was given in conjunction with radiotherapy.

Immediately the treatment started to work and after just three lots of ipilimumab, the melanoma had vanished. Furthermore, Hilary didn’t experience any side effects and even managed to carry on working in her part-time job at the Citizens Advice Bureau.

When I found out about immunotherapy and how it boosts your immune system, I was amazed. It sounded like such a natural idea, I was very willing to give it a go. It’s incredible what the body can do!

2012 was a very tough year for Hilary and she didn’t think she was going to see the year out.  But, thanks to immunotherapy she went from devastation in March to feeling absolutely fine in September of the same year.

“It is remarkable. I really felt great – it was amazing! Everyone said how well I looked!” says Hilary.

While Hilary was fighting melanoma, her husband, John, was also facing his own battle with cancer.

In 2011, just as he was enjoying early retirement, John felt a swollen gland in his neck and went to see his GP. He was referred to his local hospital, where a biopsy revealed he had stage three lymphoma.  John felt shocked, expecting to hear he had a harmless cyst. 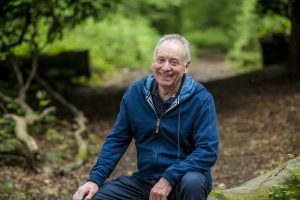 John was referred to Southampton, under the care of Peter Johnson, Professor of Medical Oncology at the University of Southampton, and started treatment straight away.  He took part in a trial*, involving a combination of chemotherapy and immunotherapy, with the hope that the immunotherapy would significantly increase John’s chances of beating the cancer.

After three treatments, a CT scan showed that all the tumours had gone down except one, which they believed was a thymoma (a tumour originating from the epithelial cells of the thymus, a gland located behind your sternum and between your lungs which is only active until puberty). John had the tumour taken out and was given another three lots of treatment.

The immunotherapy drug that John received was rituximab, an antibody drug which works by sticking a protein marker to the cancerous cells so that they can be identified by the immune system, allowing the killer T cells to do their job and destroy them.

This all happened at the same time John’s wife, Hilary, was having her treatment for melanoma in the very same hospital.  Despite this being a challenging time for the whole family, they turned to each other for support. “When Hilary was feeling down and negative, I would counter that with positivity,” says John.

John went on to have radiotherapy as a precautionary action and started his ‘maintenance treatment’, taking the immunotherapy drug rituximab every two months for a further two years, up to the end of 2014.

My feeling is that if ever I come out of remission, there will be something else in the ‘tool box’ by then, research developments will enable more choice of treatments and something will work.

Three years’ on, John is amazingly in full remission and is no longer on any medication to treat his cancer. John is now extremely hopeful about the future.

Hilary and John are so grateful to live near Southampton.  “We had no idea all this research was going on in Southampton. We have said we will never move from this area because the treatment has been so good. The people and the treatment were both amazing,” says Hilary.

“Opening a new centre, dedicated to cancer immunology research, is fantastic. This will only make things better, helping to eradicate cancer and give hope to more people.  There are more survivors now and the more research there is, the more survivors there will be,” adds John. 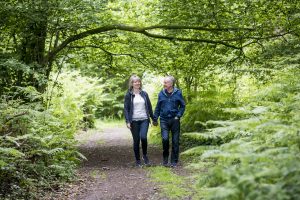 Hilary and John are now both living life to the full – actively involved in voluntary work and their local church, as well as enjoying walking, travelling, going to the gym and spending time with family and friends. We now live for the day and cram as much in as possible! We don’t store up our long-term treats but just do them!” says John. “We don’t put anything off,” adds Hilary, “we go straight away and do it.”

Hilary and John have already donated to our campaign to make the new Centre for Cancer Immunology a reality. They are keen to share their support and pay tribute to the professionalism, compassion, dedication and support of all those involved in their recoveries.

People say “why me?” but I say “why not me?" One in two of us are predicted to get cancer now and it struck twice in our family at the same time! It brings home how more research and better treatments are so important.

* The trial that John took part in was one of a series testing the antibody rituximab, which has been the subject of extensive studies in the immunology laboratories in Southampton, to find out how it works in treating lymphoma and how the effects can be made better for patients in the future. Southampton was one of the first places in the UK to test this treatment and others like it.