In December 2010, Charlotte, aged 36, noticed a very small mole on her knee that looked a bit unusual. Following a trip to the doctors, the mole was removed. However, in January 2011, results from the biopsy revealed Charlotte had malignant melanoma.

Charlotte went on to have further surgery, known as a wide local excision, to make sure all the melanoma cells in the area were removed. She also had a sentinel node biopsy, to see if any cancer cells had spread. Unfortunately they had and Charlotte was diagnosed with stage three melanoma.

When they peeled back the covering of the node, it was all cancer. It started to dawn on me just how serious this was. It was scary.

Charlotte was informed chemotherapy and radiotherapy would not be effective in treating her melanoma and was advised to just sit and wait to see if the cancer would spread further.  This was a difficult time for her.

Luckily, Charlotte was invited to join an immunotherapy trial.  At this time, only one significantly successful immunotherapy trial had previously taken place on melanoma. Although only marginally increasing the life expectancy in terminally ill patients, it was the first time any positive results had been shown. Charlotte readily agreed to take part, uplifted by the possibility of both hope and control, and was recruited onto a three year trial at Southampton

One of the most powerful things is hope. I went from being in complete despair, to having hope that I might survive longer than I originally thought. That hope completely lifted me up.

During the trial, treatment took place every three weeks for the first three months, but was then reduced to just every three months for the next two years. Although Charlotte felt tired, she only experienced very mild side effects and was able to carry on working. “Going to work helped me keep my mind off things and have as normal a life as possible. It wasn’t obvious that I had cancer, as I didn’t lose my hair, so I didn’t have to keep explaining myself,” she recalls. 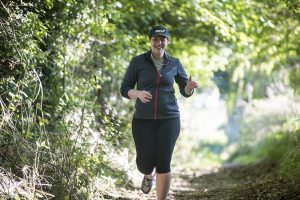 It has now been over five years since Charlotte first started the trial and we are delighted she is still cancer free.

Charlotte and her partner, Paul, recently bought their dream home on the edge of Salisbury plain, seeking a more rural lifestyle – the perfect antidote to her busy job in Southampton. Five years after her diagnosis, Charlotte hasn’t looked back. When not busy decorating the house, Charlotte is often out running, exploring the beautiful countryside just seconds from where she lives.

I don’t think I would be here if it wasn’t for the drug and the trial that I was on at Southampton. I feel very lucky.

Hear from Charlotte herself:

Immunotherapy drugs have revolutionised the treatment of melanoma. Thanks to patients like Charlotte getting involved in clinical trials we are now able to significantly extend the life of patients with advanced melanoma.

The trial that Charlotte took part in at Southampton was EORTC 18071: A randomised, double blind, phase III trial of ipilimumab vs placebo after complete resection of high-risk stage III melanoma

The trial that Charlotte was on has recently been ‘unblinded’ revealing that she was receiving the drug, ipilimumab. Thanks to fantastic results like Charlotte’s, ipilimumab has now been licenced for use in the NHS to treat advanced melanoma.