When Crispin began to experience discomfort swallowing, the last thing he thought it could be was cancer. As a healthy man who had recently celebrated his 40th birthday – and as a GP – he knew such a diagnosis was highly unlikely. Although the symptoms were intermittent, they persisted for a few months – so Crispin decided it would be wise to get himself checked out.

Whatever the doctors had found in his oesophagus was large, but fortunately nowhere else in the body. Their general optimism was reassuring, yet further tests were necessary to be conclusive. Crispin’s GP – a friend of the family – insisted on coming to his house to give him the results. Nothing could have prepared him for the bad news: oesophageal cancer.

This was back in 2016. Before major surgery, Crispin underwent a gruelling schedule of chemotherapy and radiotherapy for several months at University Hospital Southampton. Although deemed a success, the operation was tough on Crispin; he felt like he’d been “hit by a bus”. Determined in his recovery, however, he was back home within just six days.

That was the first punch in the guts. I remember curling up in one of the big chairs, wanting to go into my own world and just forget about it – pretend that it’s not there, and it’s not happening, and it’s not real.

“At that time, we were all fairly confident that was going to be the end of the story, and the doctors were all really confident too,” says Claudia, his wife. “But also, in the back of our minds, as doctors ourselves, we knew that if it came back, that would be it.”

Crispin was finally able to return to reality. However, less than two years after the surgery, he started experiencing stomach pains. Following a lengthy wait for test results, it was what he’d dreaded most: the cancer was back. He was devastated: “You can’t get away from the fact you have cancer again. You have a split second where you forget about it – you’re watching TV and you manage to zone out – and then it comes back. Every conscious moment, it’s there at the back of your mind.”

A prognosis of nine to 18 months was given, which Crispin and Claudia were “weirdly happy” about – more than they’d expected, and enough time to spend another Christmas – and hopefully summer – together with their sons. But they were also determined to investigate if there were any more radical attempts they could make to get rid of the disease. To their relief, Southampton had recently opened an immunotherapy trial for oesophageal cancer – and he was accepted. 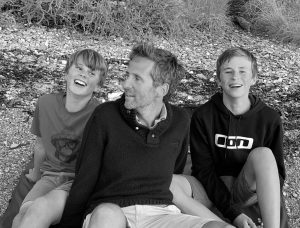 Some cancers are able to avoid being detected by the body’s immune system by supressing T-cells in the immune system. Durvalumab is known as a checkpoint inhibitor drug because it blocks the “checkpoints” that prevent immune cells – such as T-cells – from effectively destroying their targets. Cancers are able to engage these “checkpoints” and thus become shielded from immune attack. Drugs like durvalumab can effectively remove this shield and boost the immune system to find and destroy the cancer cells. Durvalumab, when used on its own, had already shown promise in advanced solid tumours including gastroesophageal cancer.

The trial, which is supported by the Ludwig Institute for Cancer Research and coordinated by Oxford University, was a Phase 1 trial testing durvalumab in combination with tremelimumab and standard chemotherapy. Within three weeks and after only two rounds of the immunotherapy treatment, a scan revealed that Crispin’s tumour had shrunk by a third. It was a remarkable turnaround, and even the researchers were shocked by the rapid improvement. After completing six months on the trial, he met with his doctor, who had a “beaming smile on his face”. Crispin was in complete remission!

"Examples like Crispin are incredibly encouraging and we believe that it is only a matter of time before we see more exciting results in this area of cancer.”

Dr Ioannis Karydis, Honorary Associate Professor in Medical Oncology at the University of Southampton and Consultant in Medical Oncology at University Hospital Southampton, led the trial in Southampton and said: “Current treatment options for oesophageal cancer that cannot be cured by surgery or radiotherapy are limited and their benefits relatively short-lasting in the majority of cases. But we know that drugs that stimulate the immune system to attack tumours are revolutionising treatment for other cancers and can lead to long term remissions. Results in oesophageal cancer have not been as exciting as in lung or skin cancer, so immunotherapy has not yet replaced existing treatments like chemotherapy and radiotherapy. However, examples like Crispin are incredibly encouraging and we believe that it is only a matter of time before we see more exciting results in this area of cancer.”

Crispin has had three follow-up scans this past year, all clear of cancer. He now understands the phenomenal power of immunotherapy and Southampton’s ability to deliver it: “I know that oesophageal cancer doesn’t have a great prognosis. Ten or even five years ago, there were no treatment options – that’s why I think immunotherapy is just the most amazing miracle thing ever. I wouldn’t be here without it. Everyone at Southampton has been absolutely brilliant. We always talk about their characters; they are exactly what you want in a medical team.”

Crispin and Claudia know that the funding of more clinical trials is desperately needed. Crispin also acknowledges that immunotherapy can have long-lasting effects and has begun to plan for his future once more. He is hoping to take his family on holiday again, see both of his sons settled at secondary school, and enjoy many more Christmases with his loved ones. 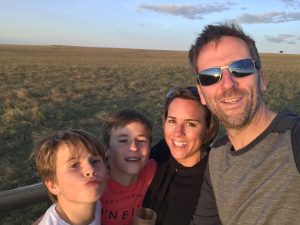