When five of her friends were diagnosed with cancer, the realities of the terrible disease hit home for Liza Butterworth.

She saw her friends, who did not know each other, battle the disease with courage, determination and strength. Tragically however, she saw some of those friends lose their battles.

“It was devastating,” Liza said. “One of my friends was bed ridden and lost her sight. She had just had her third baby when she was diagnosed. She was on deaths door but was then given immunotherapy; and for a short time, she was on the road to recovery. But, then it stopped working and she sadly passed away.

“A friend’s daughter was diagnosed with cancer – she was just five years old. And again, immunotherapy almost saved her.”

This awful disease was invading my friends’ lives and their family’s lives.

Fortunately, one of Liza’s friends has recovered thanks to an immunotherapy trial at Southampton and has now been in remission for four years.

Liza said: “To see the treatment work is wonderful and offers so much hope. It shows us what can be achieved, but we need more research to tell us why it only works in some cases. We need to develop these treatments even further to make sure that it does work for everyone.”

Inspired by the clinical trial her friend was on, Liza discovered the University of Southampton’s campaign to build the Centre for Cancer Immunology and wanted to lend her support. 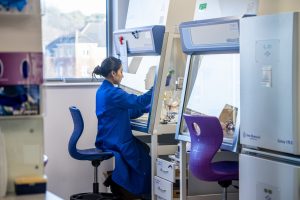 “Saying ‘I’m sorry to hear about your diagnosis’ to people just wasn’t enough,” Liza explained. “I wanted to do something to help. We are all going to be touched by cancer, whether it’s friend or family so, I felt it was important to do something and support such a worthy cause. The Centre is truly remarkable and to have it on our door step is something to be very proud of. It is achieving so much already – I am in awe of everyone who works there. They are all superheroes and I am so grateful their work is giving hope to so many.”

To support the Centre, Liza arranged a fundraising event in 2018 to which more than 500 people attended. The event included an auction, raffle and a performance from a group of opera singers, organised by Adam Green. More than £75,000 was raised for the Centre, which helped to support the UK’s first PhD programme in Cancer Immunology, an Innovation Residency programme to foster collaboration in cancer research and purchase vital equipment. 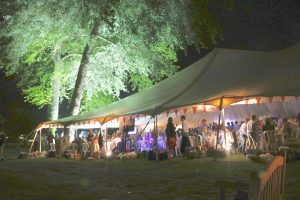 Liza aims to hold another event in 2021 after the one she had planned for 2020 had to be cancelled due to the coronavirus pandemic. But her dedication to the Centre has not stopped in the interim. Liza is a painter and has pledged to donate 20% of every sale that comes via the Centre, to the Centre. Her work includes both portraiture and landscapes and her style and subject matter are varied as she explores different techniques and palette ranges.

She added: “I’ve always drawn and ended up falling into this profession. I’m so glad that I can use it now to help the Centre.” 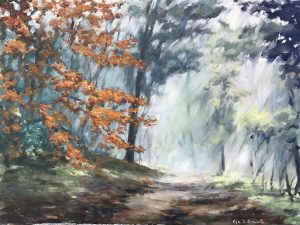 Liza visited the Centre last year and saw first-hand the pioneering research taking place. She believes now more than ever, especially after the coronavirus pandemic, people need to be doing what they can to support charities, which have seen a financial hit. For example, the UK’s National Cancer Research Institute has projected a devastating 24% drop in the UK’s overall cancer research spending in 2020, driven by a 46% fall in charity sector funding. 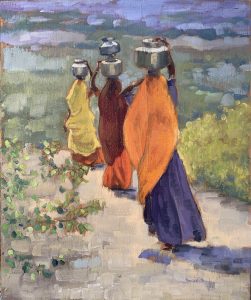 “There are so many worthy causes that desperately need funding and more support,” Liza commented. “Research is the only way we will beat diseases like cancer and we all need to do our bit – big or small – to support the people that do this vital work. I hope the event next year will be as successful as the first and we can raise more money for this groundbreaking Centre.”

Visit Liza’s website www.lizabutterworth.com to see the array of work she has available. Simply contact her directly to make a purchase and quote CANCER IMMUNOLOGY to ensure 20% goes to the Centre.

For more information on how to donate to the Centre, click here.

Research is the only way we will beat diseases like cancer and we all need to do our bit – big or small – to support the people that do this vital work.