It is the international reputation for translating basic scientific discoveries into pioneering patient treatments that first attracted Michaela Christodoulaki to the Centre for Cancer Immunology where she has started her PhD. She had heard that the Centre would be the first of its kind in the UK and wanted to be a part of it.

“I met with Tim Elliott and Edd James and I was so impressed with their passion and drive for research in cancer immunology,” she said.  “The Centre is incredible – every person is working towards the common goal of eliminating cancer and I am thankful for the opportunity I was given to be a part of such a brilliant team of people.”

Michaela graduated from the University of Bristol with a BSc in Cancer Biology and Immunology and during her studies was awarded a Wellcome Trust Biomedical Vacation Scholarship for a research project, which made her realise her future career needed to be in cancer immunology research.

The approach to translational medicine is something which really appealed to me. To know that our discoveries in the laboratories will find their way into patient clinics makes all of the work so rewarding.

Michaela, who is originally from Greece, is at the beginning of her four-year research project which aims to identify cervical cancer associated ERAP1 variants and their function, in attempt to provide the tools to identify women at high risk of developing cervical cancer so they can receive early and successful treatment.

She said: “According to CRUK, cervical cancer is the 14th most common cancer in women in the UK with about 3,200 new cases every year and incidence rates are expected to rise by 43 per cent between 2014 and 2035. These statistics show that research on new therapeutic approaches and prognostic tools for cervical cancer is urgent.”

Cells display protein fragments called antigenic peptides on their surface that allow immune cells to survey the cellular environment for potential problems such as infection or cancerous cells. Killer T cells, a vital component of our immune system, are able to recognise antigenic peptides at the cell surface after they are trimmed to a specific length by ERAP1 inside the cell.

Michaela explained: “But in women who develop cervical cancer, the cancer cells avoid recognition by killer T cells by altering key components of the pathway that generate peptide antigens.” 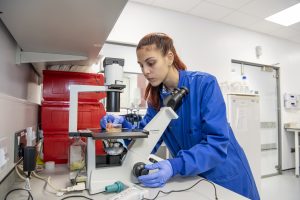 “ERAP1 genetic sequence and function is highly variable within the population, and these different variants may allow cervical cancer cells to avoid detection by the immune system and allow the cancer cells to grow in some women but not others. I will be assessing these variants and how they work so we can help identify women who are high risk of this disease much earlier than we do now.

“We need more research into the underlying mechanism of cervical cancer development and how we can use our body’s immune system to fight it,” she added.

Michaela’s PhD is being funded by the University of Southampton’s Centre for Cancer Immunology Talent Fund alongside local medical research charities Hope for Guernsey and Wessex Medical Research. She says she is honoured by the philanthropic support that is enabling her to carry out her research.

I know that I am at the best place, at the right time, to do this vital work, which I hope will help many women.”

“It is so important for people to get behind medical research, in whatever way they can. It is truly inspiring to know that people’s donations and support are allowing me to be here and work on this project,” she said. “I recently found out about Roger Allsopp, who leads Hope for Guernsey and who swam the English Channel at the age of 70 to raise money for cervical cancer research – it was amazing. I want to be able to make those people proud and give something back to them. Hopefully my work at the Centre will enable me to achieve that.”

Michaela appreciates first-hand the devastating impact that cancer can have on a family. Ten years ago, her grandmother was diagnosed with cancer which resulted in her having one of her kidneys removed. She was a positive force in Michaela’s life and a source of great support and comfort. Thankfully treatment was successful, and her grandmother is now able to see the impact Michaela is having in the research lab.

“Cancer is a devastating disease and affects many people every single day. The research that is taking place at the University of Southampton, within the Centre for Cancer Immunology, will keep pushing boundaries and finding new ways to successfully treat people. We are part of something that is bigger than us as individuals – the Centre’s work as a collective, will have an impact on the lives of so many other people and it is an honour to be a part of that.” 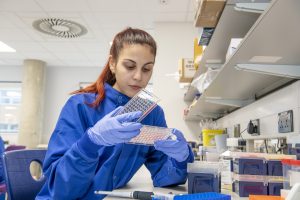