Leading the way in lymphoma research 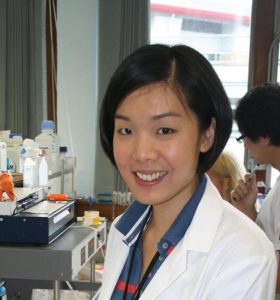 A cancer scientist from the Centre for Cancer Immunology has been recognised for her research that could dramatically improve lymphoma survival.

In a recent study, funded by Cancer Research UK and published in Cancer Cell, Sean Lim found that a particular combination of antibodies –targeting CD27 and CD20, greatly increased life expectancy in mice with cancer.  The study found that the antibody combination increased the number and ability of a specific type of immune cells, called myeloid cells, to destroy cancer cells.  This combination is now being tested in a human trial (RiVa).

The research has led to Dr Lim to be awarded The Roger Griffin Prize for Cancer Drug Discovery.

The award is given by The British Association for Cancer Research (BACR) and is an annual prize of £1000 awarded to an early career researcher who publishes the best paper on cancer drug discovery as judged by the BACR Executive Committee. Dr Lim will also have the opportunity to present an oral paper at the annual NCRI Cancer Conference later in the year.

Dr Lim said: “I am very honoured to be awarded this prize and look forward to presenting the work at the NCRI Conference.  The prize money will go towards our research.  We intend to continue building on these exciting findings to uncover the full potential of our discovery.

“It’s very exciting to see that this drug combination has a dramatic impact on survival of mice with lymphoma, as improvements in treatment are urgently needed. The next stage will be to see if what we’ve discovered can be replicated in patients.”