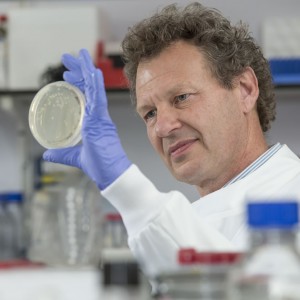 Centre Director Professor Tim Elliott takes a look back at 2018 – a pivotal year for the Centre for Cancer Immunology, its staff and the patients it was built to help.

“Only a year ago, the Centre was just about recognisable as a building and we were ramping up our fundraising efforts ready for the final push towards our £25m target: which we made sooner than we had expected – announcing it at the end of January to much excitement and media attention. [links]. It was a remarkable achievement thanks to the generosity of 6,000 individual donors and supporters – of whom about 60 per cent were alumni, staff or students.

“We got more opportunities to talk to the media about the Centre and its great work in February on World Cancer Day, including an appearance by Christian Ottensmeier and Charlotte Moss – a patient and supporter of the CCI – on the Victoria Derbyshire Show, which was a great hit. It distracted us briefly from the fact that the new building was complete and looking very inviting indeed, yet we had to wait a little longer until the final snagging inspection had been completed and the building officially handed over.

“This duly occurred in February as planned and the move itself went smoothly and we held an event in April to celebrate completion of the building with all the key stakeholders in the project: University teams, UHS and Kier Construction.

“In March, we held the first of several events to thank our high-value donors – a drinks reception followed by an evening of short lectures at the Royal Society. We followed this with an open day in July to celebrate with donors and supporters, including a VIP tour in the evening. My lasting impression of that day was just how many staff volunteered to help, and how all of them rose to the occasion with real panache. It made me realise that with so many people ready to take the initiative like that, and to work together as a team, we have a bright future ahead.

“We want to be recognised not so much for what we do as what we achieve, and there has been much to celebrate this year on this front, especially from women in cancer immunology. In August, Freda Stevenson won the Henry Stratton Medal – awarded by the American Society for Hematology to honour individuals who have made outstanding contributions in basic and translational science. The medal was awarded at the annual congress in San Diego in December and although Freda was unable to travel to receive it, Professor Peter Johnson accepted it on her behalf and in a small but significant ceremony back home, hosted in the CCI by the Vice Chancellor he passed it on to its rightful owner.

“In September, Dr Sean Lim won the Roger Griffin Prize – awarded by the British Association for Cancer Research – and launched a new clinical trial to follow on from her successful preclinical study into the synsergistic combination of anti-CD27 and anti-CD20.

“In October, Professor Juliet Gray hit the news with the launch of her clinical trial in paediatric neuroblastoma, with partners in USA and Germany. And in December, Sarah Buchan published a groundbreaking investigation in Immunity (DOI: 10.1016/j.immuni.2018.09.014) into the mechanism of action of anti-41BB. Meanwhile, Sally Ward travelled to Stockholm this month to help Greg Winter celebrate his winning this year’s Nobel Prize for chemistry. While working with Greg in Cambridge, Sally published one of the key phage-display papers (for which the prize was awarded) in her 1989 Nature paper (DOI: 10.1038/341544a0).

“2018 has been a significant year in Southampton’s 45 year history of cancer immunology research, and marks the beginning of a new phase of development for us and a new era of philanthropy fundraising for the University. The future has never looked so bright.”