Chaos is a ladder – the unspoken truth of OneWeb

On the eve of the Games of Thrones finale, we thought it would be fun to reflect on what we think of the OneWeb philosophy and how it reflects the lives our favourite Westerosi characters.

*Spoiler alert* no one dies (not yet anyway 😂)!

Chaos is a ladder

“Chaos isn’t a pit,” spake Littlefinger. “Chaos is a ladder. Many who try to climb it fail and never get to try again. The fall breaks them. And some, are given a chance to climb. They refuse, they cling to the realm or the gods or love. Illusions. Only the ladder is real. The climb is all there is.” – Petyr “Littlefinger” Baelish

If we dig deeper into this quote, it entails self-survival and the power to seek and influence. It also talks about embracing unpredictability and where it can potentially take you.

OneWeb is about embracing change. Digital transformation is the act of radically changing how our university works, so it can survive and thrive in the digital era.

The thing is, change gets a bad rap. We fear what change can do to us, instead of thinking what we can do because of it. The acceleration of change, especially in digital programmes, often creates anxiety and stress, which is understandable. Not because it’s complicated, but because its primary function is of people, behaviours and relationships.

Sometimes you have to break stuff to improve it

As we previously mentioned, OneWeb is not about a shiny new website. The shiny website is merely a symptom of digital transformation – of us understanding and building a relationship with our users over time.

Daenerys ‘Breaker of Chains’ Targaryen starts with nothing. She has no land, no army, no power. Over time, she motivates her followers, builds relationships and amasses thousands of people to join her cause.

She is trying to create a better world by casting aside the trappings and traditions of the old one, and the ‘end users’ buy into this proposition.

OneWeb is an opportunity for advancement. Our official kick off was on 1 April, and what can I say? There are many moving pieces, many meetings, many events, and our user researchers are working hard to bring the insights we need in order for all of us around the University to learn fast, act, iterate and move on.

A critical part of delivering the change and for making all this happen is an empowered agile multidisciplinary team. And we have these teams now. Every team member has their own unique strength. As an Agile team, we’re learning together, we’re appreciating change together and we’re working together.

From Content Designers to User Researchers, we’re collaborating to understand our users better and find the right solutions to problems.

Davos Seaworth knows that one can’t learn without trying and failing. When Jon Snow doubts his ability to lead and make an impact, the Onion Knight has this to say: 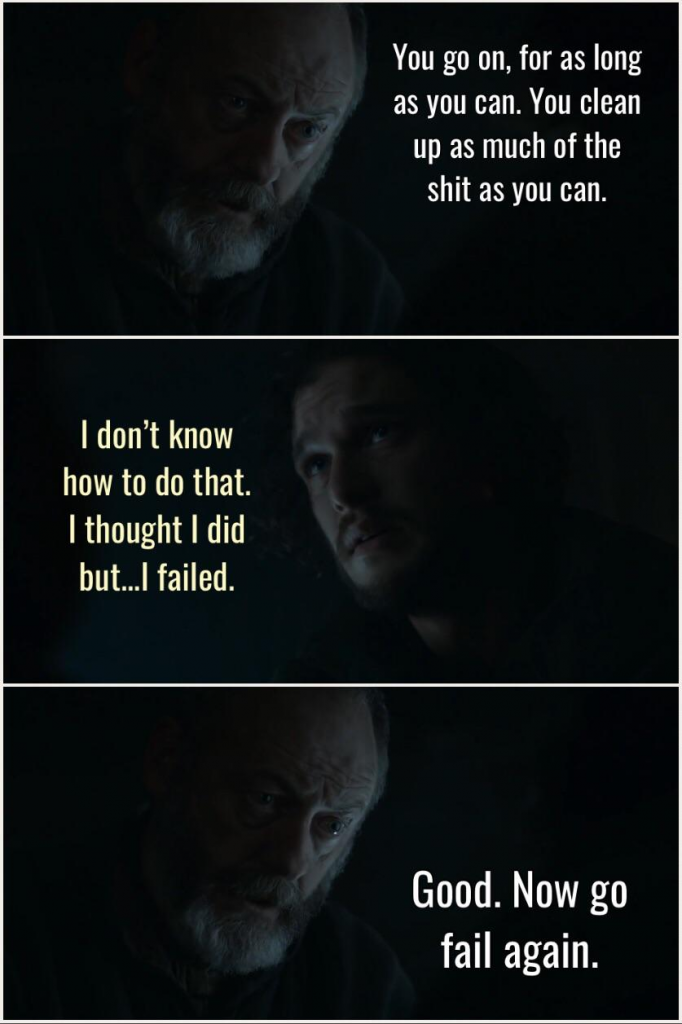 Ser Davos understands that we won’t always succeed the first time we try, but what’s important is to have tried our best and to try again.

Our work is founded upon what our teams learn from research that involves real users, not on guesswork. We can’t be blinded by fear. Instead we can put these thoughts into work, evaluating the risks and acting to mitigate them where we can. Sometimes that means falling down, questioning everything, and then climbing back out of that cave to become a more well-rounded, self-aware person ready for a change.

So let’s clean up as much of the 💩as we can. And if we fail, let’s go fail again.

On Wednesday 1 May Mark Wyatt and Ayala Gordon will be available for an AMA (Ask me anything) session about OneWeb.

👉🏻 You can submit your questions in advance. More detail to follow.

Credit: thank you Jonny and Mark for helping me to translate my ideas into words.