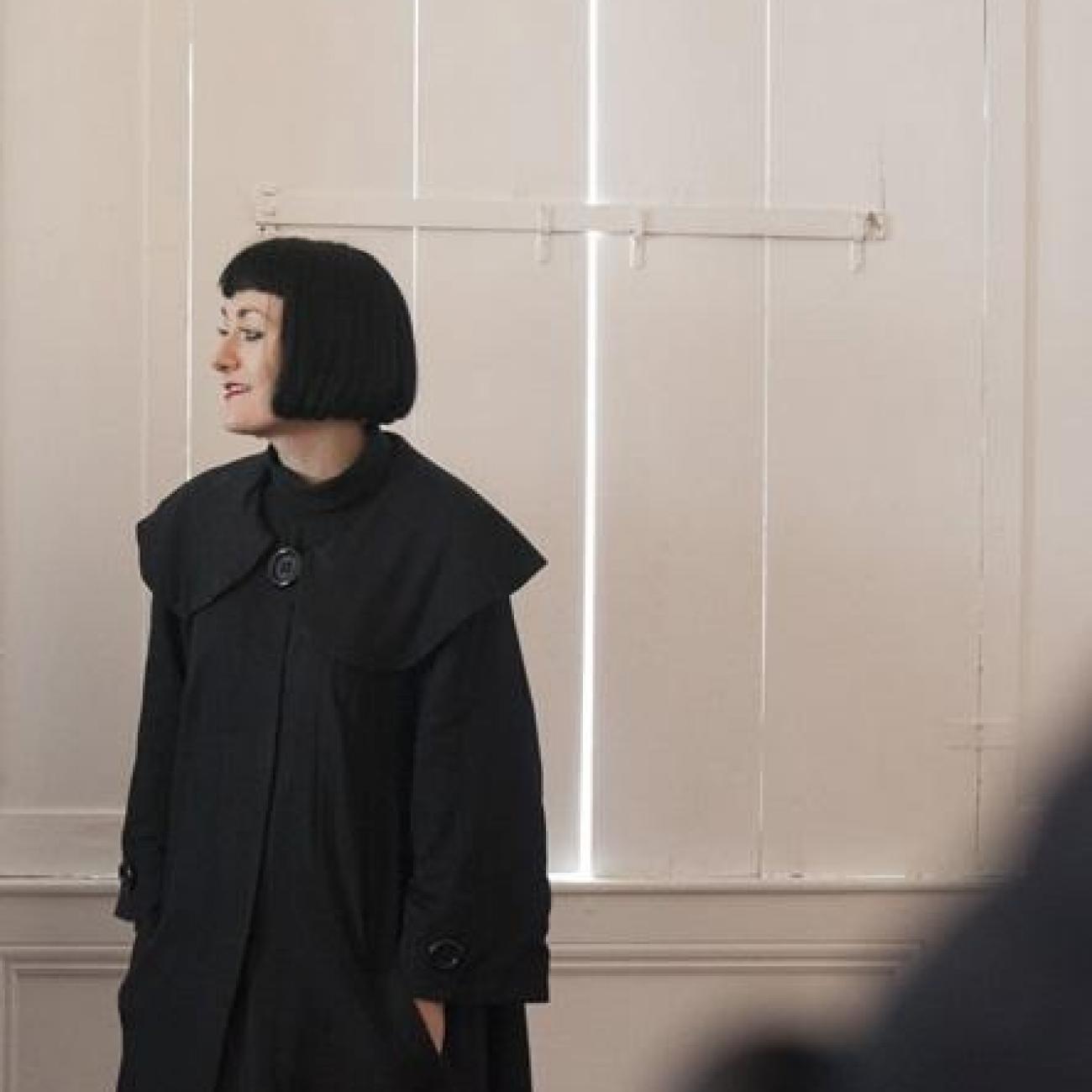 Dr Sarah Hayden is Associate Professor in Literature and Visual Culture. Since 2019, she has led two consecutive AHRC Innovation Fellowship projects under the umbrella-title: Voices in the Gallery (2019-23). While the first phase of this research explored contemporary art’s invisible (withheld) textuality, as it manifests in the voiceover and voiced writing, the second is concerned with intersections of voice, text and access in art. Sarah’s research and teaching is interdisciplinary; she often collaborates with artists and art institutions and her work is creative and curatorial as well as critical.

Sarah has published two monographs and is at work on a third. The first, Curious Disciplines: Mina Loy and Avant-Garde Artisthood, is on avant-garde art movements and modernist literature. The second, Peter Roehr–Field Pulsations, is jointly authored with Paul Hegarty and is about German minimalist art from the 1960s. Sarah is currently completing a book on voice in contemporary art for University of Minnesota Press. This book analyses voice in video in new depth. In it, she approaches “voiceworks” through a literary sensibility that attends simultaneously to the minutiae of syntax, rhythm and phrasing in artists’ writings, as well as to the vocal performance and production that translate that writing into sound.

Sarah is currently writing a book on voice in artists’ moving image for University of Minnesota Press and leading the Voices in the Gallery AHRC Innovation Project (2019-2023). As part of her work on Voices in the Gallery, in 2022 she is curating a solo exhibition of new work by Liza Sylvestre at John Hansard Gallery, collaborating with LUX on an audio description project and continuing to develop the Caption-Conscious Ecology programme she initiated at Nottingham Contemporary in 2021. Together with Hannah Wallis at Wysing Arts Centre, she is co-leading a new British Art Network Art of Captioning research group.

Recent publications related to her ongoing research on voiceworks include essays on Emma Wolukau-Wanambwa for LUX, Christopher Kulendran Thomas for Cultural Politics, Nancy Holt for Holt/Smithson Foundation, Jenny Brady for LUX, liquid voice and sensorial sovereignty for b2o: boundary2 online, access via versioning for Wysing Broadcast and a trio of experimental lecture-poems on Teacher Voices in video for SpamPlaza.

Sarah teaches undergraduates and postgraduates on material from across the 20th and 21st centuries and currently contributes to Moderns to Contemporaries and Poetic Language. She devised and convenes Speech Acts: a critical/creative module on writing for voice and voice in writing.

Speech Acts invites students to explore how writers activate and amplify the sonic properties of language and why artists use vocal performance of text in video art. We consider how text can ‘perform’ on the page (or onscreen), and what it means for language to be performative. We investigate what writing for performance requires, how we ‘read’ what is spoken, and ‘hear’ what is written. Engaging with the work of artists and writers including Hito Steyerl, Jay Bernard, Samuel Beckett, Sean Bonney, John Akomfrah, Holly Pester, Moyra Davey, and Mona Hatoum, we explore the relations between writing, speaking and sounding.

I joined Southampton in 2016, having previously held Associate Lectureships in Visual Cultures and English & Comparative Literature at Goldsmiths, University of London and lectured on an occasional basis at University College Cork and the National College of Art and Design, Dublin. My interdisciplinary research has long been concerned with the relations between art and experimental writing practices, but over time my focus has shifted across decades (and centuries!) and addressed a range of modes and media.

At present, my research explores the intersection of voice, text and access in contemporary art. You can read about my current book project and the public events, workshops, exhibitions and collaborations associated with my ongoing AHRC Innovation Fellowship Voices in the Gallery under Research.

My doctoral research at University College Cork was in early 20th-century modernist and avant-garde studies, and centred on the writings of Mina Loy. Having completed this IRC-funded comparativist literary study, I took up a DAAD postdoctoral fellowship in History of Art at the Freie Universität Berlin then (after a short digressionary excursion into Paris Dada) returned to UCC to complete a Government of Ireland postdoctoral fellowship. My first book, Curious Disciplines: Mina Loy and Avant-Garde Artisthood, was published in 2018 by University of New Mexico Press. Positioning Loy as an exemplary theorist of the artist-figure (1909-1945), this study exposes Loy’s radically critical perspective on the evolution of the international artworld in transit from Europe to the US. Tracking Loy’s theorizations of Futurist, Dada, Surrealist and ‘Degenerate’ artisthood through her poetry, prose, drama and polemics, the book culminates in an examination of her legacies in 21st-century American poetics. This book was reviewed in The Review of English Studies, Modernism/modernity, and American Literary History and elsewhere. Prior to publishing Curious Disciplines, I provided the introduction and edited new archival material for the re-issue of Mina Loy’s 1930’s novel, Insel (New York: Melville House Press). My second book, Peter Roehr–Field Pulsations is jointly authored with Paul Hegarty. This book is the first monograph on the German Minimalist and Pop artist, Peter Roehr, who produced highly repetitive work using mass-produced material in text, film, sound, photographs, objects and images. As well as his artistic work, Roehr was significant in his curation of international art and is now being rediscovered as a force in 1960s experimental art. Other critical publications of mine include essays on paintings by the American artist, Jasper Johns (2015) and Dada prose by Francis Picabia (2013).

I also publish and perform as a poet and run the Entropics series at Southampton. My poems and lecture-poems have been published in magazines including Blackbox Manifold, para-text, Golden Handcuffs Review, Tripwire, Datableed and performed in the UK, US, Ireland, Germany and Czech Republic. Four long cycles have appeared as the chapbooks, Sitevisit (Materials), Turnpikes (Sad Press), System Without Issue (Oystercatcher Press) and Exteroceptive (Wild Honey Press).

Alongside research and writing, my work sometimes allows me to curate exhibitions as well as event programmes. In 2020, I curated Many voices, all of them loved at John Hansard Gallery. This exhibition featured work by Emma Wolukau Wanambwa, Laure Prouvost, Kader Attia, Willem de Rooij, Lawrence Abu Hamdan and Liza Sylvestre. In the same year, I was invited by Tuna Erdem and Seda Ergul at Queer Art Projects to guest-curate a voice-in-video strand of #WIP: an exhibition themed around process and work-in-progress. For #WIP, I selected work by five artists—Larry Achiampong, Sam Keogh, Naeem Mohaiemen, Sophie Seita and P. Staff—whose practices are situated between video, performance and writing. I am currently curating a solo exhibition of new work by Liza Sylvestre, for presentation at John Hansard Gallery in October-December 2022.

I am occasionally invited to converse with artists live, on video or in writing. In 2018, I was commissioned to develop a voiceover for the exhibition ‘Atherton After Ireland: A Kevin Atherton Retrospective’ at the Sirius Arts Centre in Cobh, Ireland. To inaugurate our collaboration, Kevin Atherton and I also worked together on ‘In Two Minds (1978/2018)’: Interrogated, a one-night performance in January 2018. Essays on this collaboration appear in the commemorative artists’ book One Here Now. Other recent in-conversation events include a live interview with Ailbhe Ní Bhriain at Whitechapel Gallery London (2020), two video conversations with Niamh O’ Malley at John Hansard Gallery (2022 and 2020). More recently, I have been invited to speak on Teacher Voices in video-art at the Sound/Text seminar series in Harvard, and given invited online presentations on Starting to Think about Access and the Moving Image to aemi (artists’ and experimental moving image) in Ireland and on Access as Ethos for the British Art Network.