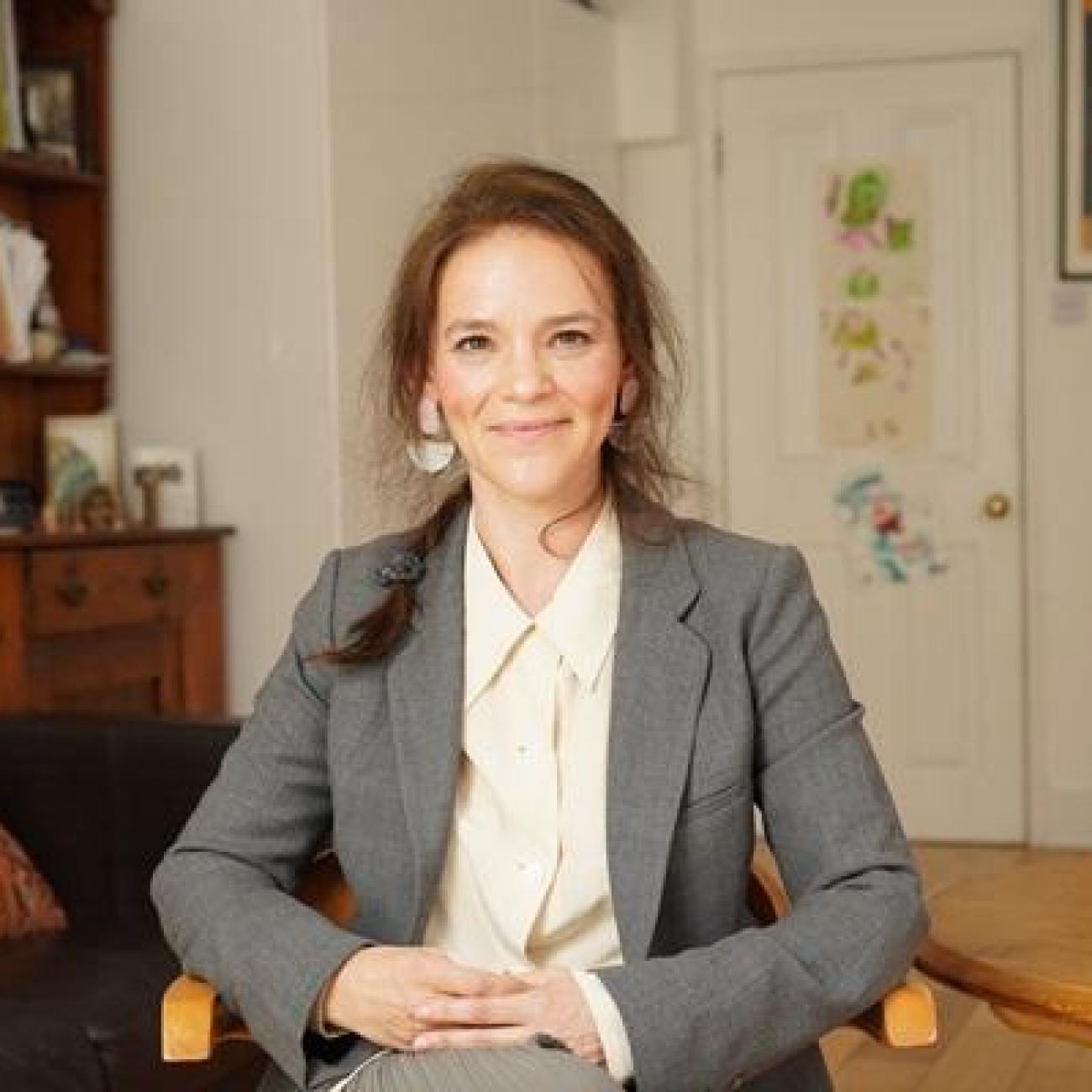 My book Feeling Jewish (A Book for Just About Anyone) (Yale University Press) came out in 2017. It explores feelings that have been stereotypically associated with modern Jews – self-hatred, guilt, resentment, paranoia, anxiety, hysteria, overbearing maternal love - and analyses why such feelings may be increasingly common to us all as the pace of globalization leaves many feeling marginalized, uprooted, and existentially threatened. One chapter from the book has been extracted and adapted for a long read essay in The Guardian, and the book has also inspired a New York Times Sunday Review essay and other essays, talks (with Zadie Smith at McNally Jacksons in Manhattan, with Josh Cohen at King's Place in London, with Adam Phillips at Lutyens & Rubinstein in London) and blogposts, e.g. here, as well as this guilty podcast for an American public radio station's show, To the Best of Our Knowledge.

My work on feelings has led to other projects, including my guest coediting of a special issue of Granta, Granta 146, on 'The Politics of Feeling', which draws together an anthology of responses to our contemporary moment.  The issue includes an introductory essay and my long interview with Adam Phillips about 'Politics in the Consulting Room'.

The Jewish Joke (Profile Books) also came out in 2017 and has been the subject of radio and press interviews (e.g. for ABC radio in Australia) and the focus of public events where I’ve been in conversation with comedians (such as David Baddiel, David Schneider and John Fugelsang). I’ve also lectured on joking and comedy at various events, including a lecture for The Freud Museum’s conference ‘Beyond The Joke’(May 2019) and keynotes at the annual conference of the International Society for Heresy Studies at Senate House (June 2018) and UCL’s Institute of Advance Studies conference on ‘Laughter’ (July 2019).  I have also presented three short informal talks on joking - and i) politics ii) religion and iii) sex - for the online publishing platform EXPeditions (all available both as video and transcript).

My earlier research focussed predominantly on the role of religion in modern and contemporary politics, literature and philosophy.  In a West glossed as ‘secular,’ hostility towards migrants and diasporic groups has often been predicated on an imputed primitivism or even barbarism to their religions and religiosity – as if Western culture were not itself deeply formed by its own religious heritage.  It is this disavowal of religion that I examine at length in a number of articles and book chapters.

The documentary feature film I co-directed, The New Man (2016), funded by the Wellcome Trust, looks at a female experience, pregnancy, from a predominantly male point of view, tracking the migration of hysterical feelings into a twenty-first century man, who feels replaced by not only the prospect of a baby at his wife’s breast, but by new reproductive technologies in the bedroom, and by women in a global workplace. Theatrically released, the film has been widely reviewed across the UK print, radio and television media and has had numerous special event screenings and also been screened in academic contexts as well as in education and training contexts for use by midwives and psychotherapist groups. It has also been the subject of a conversational feature in Granta Magazine. The unofficial sequel to that film, another creative documentary/ remarriage comedy’ feature called Husband, has its premiere at the Edinburgh international film festival (official competition) in August 2022 (trailer).  It will be on general release in theatres from Feb 2023.  Josh Appignanesi and I were also invited by TANK magazine to have a videoed conversation as the credits rolled on our viewing of the representation of the marriage of the filmmaker, Atom Egoyan, in Calendar.

Alongside films centred on marriage, I have also written about marriage, e.g. in an essay I wrote for Granta 144’s special issue on gender, What Do Women Want?: reading Grace Paley after #TimesUp, while my new book, On Marriage, which crosses serious research with more creative elements, will come out with Hamish Hamilton for Penguin Random House in the UK in May 2023 and with Yale University Press in the US a little later in the year.

Another film I’ve helped to produce and also feature in is Josh Appignanesi’s forthcoming climate activism documentary feature, My Extinction, which includes some footage of a talk I gave for Extinction Rebellion during one of their public protests (XR Writers Rebel).  The film should be released in early 2023.  And I was also invited to write and record a short piece reflecting on where multiculturalism meets or complicates responses to the climate catastrophe for the Royal Literary Fund’s Writers Mosaic project.  You can find my essay ‘Distinctions and Extinctions’ here.

I have spoken about my research and interests at community centres, commercial centres and public as well as academic institutions including the Southbank Centre, The Royal Society of Literature (RSL), the Royal Society for the encouragement of Arts, Manufactures and Commerce (RSA), the London Film School (LFS), the Royal Albert Hall, the Philadelphia Association (PA), Centre for Freudian Analysis and Research, JW3, The Freud Museum, The London Review Bookshop (with Adam Phillips, and here, with Jacqueline Rose, with Peter Pomerantsev), The Jewish Museum, The London Literature Festival, Poetry in the City, Libreria Bookshop, The Belarus Free Theatre, Jewish Book Week (with Amy Bloom), UCL's Institute of Advanced Studies, Essex Book Festival, McNally Jackson Bookshop (Manhattan), Daunts Bookshop,  King's Place.

I have written about and been interviewed about my research and interests for a number of press as well as BBC TV and Radio programmes, including The Financial Times, Radio 3’s Free Thinking (and BBC programmes), BBC2’s Newsnight, Radio 4’s Front Row, news programmes, and TV and Radio documentaries in the UK, America and Australia.  And I’ve written and reviewed for a range of publications including Tate Etc, The JC, the Jewish Quarterly, The New York Times, The Financial Times, The Guardian, Times Higher Education, Granta Magazine and History Today.

I have also given broader researched based interviews for different platforms, as here.  And in October 2017 my research was the subject of a feature profile in Times Higher Education.

I am currently completing a long piece of research, a book entitled On Marriage.  A work that crosses serious scholarship with more creative elements, the book is an enquiry into the idea and practice of marriage that combines philosophy, cultural criticism, psychoanalysis and memoir.

I have recently codirected a second feature film with Josh Appignanesi.  Husband is in its final stages of production and should be released into festivals and cinemas in 2022.  The film is a docufiction/‘remarriage comedy’ portraying a marriage undergoing various stresses in a comical vein.  It focuses on a trip I made to the US with my family when my first book was published.

I am also a producer and performer in another forthcoming (2023) creative documentary feature film directed by Josh Appignanesi concerning the Extinction Rebellion climate protest movement leading up to the Tufton Street protest by ‘Writers Rebel’ in September 2020, at which I was one of the speakers.

In connection to the climate crisis also, my short essay and audio recording for the Royal Literary Fund’s WritersMosaic multiculturalism project is entitled ‘Distinctions and Extinctions’ – it looks at the intersection of minority groups and universal causes.

With Professor Stephen Frosh (Birkbeck), I am coediting a new book, The Routledge International Handbook of Psychoanalysis and Jewish Studies, an anthology of essays by a wide range of international writers and researchers, slated to come out in 2024. The book aims to draw together these two fields and offer both an account and a critical assessment of the broad range of encounters that emerge from the confrontation and collaboration they have with each other.

I am currently teaching across all levels of the curriculum, undergraduate, MA and PhD.  For our undergraduates, I am involved in teaching Act of the Essay, English on the Move, Theory and Criticism and Holocaust Literature and I also convene the dissertation module.  For the MA, I am the supervisor of Special Project modules and dissertations and will soon be resuming my role as convenor of the year long MA module Approaches to Critical and Creative Concepts for the GLIM programme.

Dr Devorah Baum is Associate Professor in English Literature at the University of Southampton.  She is the author of Feeling Jewish: a book for just about anyone (Yale University Press) and The Jewish Joke: an essay with examples (less essay, more examples) (Profile).  Her next book, forthcoming for Hamish Hamilton/Penguin Random House in the UK (May 2023) and for Yale University Press in the US (autumn 2023), is a crossover creative/critical work entitled On Marriage.  With Josh Appignanesi she co-directed the creative documentary feature film The New Man and the feature film Husband.  She guest edited the special issue of Granta #146 on 'The Politics of Feeling' and she has written for a range of publications including The New York Times, The Guardian, The Financial Times, Tate Etc.