Measuring the impact of the aurora borealis on climate change

A Southampton researcher is developing new techniques to measure the temperature of the upper atmosphere and model the impact of the aurora on climate systems.
Space Environment, sustainability and clean growth

Doctor Daniel Whiter is researching new ways to measure the energy produced by the aurora borealis. He will use these measurements in atmospheric and climate models to help scientists make more accurate predictions of natural disasters such as geomagnetic storms. These storms can be powerful enough to cause satellites to malfunction and electrical power grids to fail.

Dan won a 5-year fellowship from the Natural Environment Research Council (NERC) to study how the aurora affects the temperature and chemistry of the upper atmosphere. This is the outermost layer of Earth's atmosphere, at the edge of space.

As part of his research, Dan uses the University’s facilities based in Svalbard in the high Arctic. These include:

Dan enters the measurements into a computer simulation to understand how different types of aurora are produced, what electric currents they generate, and how the aurora affects the temperature and chemistry of the upper atmosphere.

The spectacular light display produced by the aurora borealis, is caused by charged particles from space colliding with gas particles in the Earth’s atmosphere at 40 million miles per hour. These aurora deposit huge amounts of power into the atmosphere. Typically this is about 50 gigawatts, which is more than the daily electricity consumption of the UK.

Intense current flows within and around the aurora affect the chemistry and climate of the upper atmosphere. Scientists do not understand every aspect of these process yet. What is certain, however, is that some heating is taking place.

As Dan explains, “We’re trying to establish how much heating there actually is and how it’s structured. It could be very concentrated in a small region. In terms of chemistry, you could get production of nitric oxide, which could affect the atmosphere more widely, for example through destruction of ozone. It’s not known yet.”

Measuring the temperature of the upper atmosphere has not been done effectively before because it's difficult to reach this altitude. At a distance of 100 km up, it is too high for weather balloons and too low for spacecraft.

To overcome these challenges, Dan used the ASK cameras to take images of a section of the sky in fine detail. This allowed him to study the heating around different types of aurora shapes. This is because the spectrum of the auroral emissions depends on the temperature of the atmosphere. 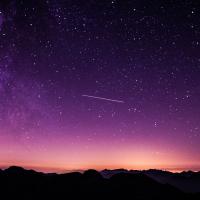 We aim to understand the nature of cosmic objects and the life cycle of stars including the impact of surrounding galaxies.

Businesses in Uganda are reaping the benefits of sustainability reporting thanks to the efforts of a Southampton academic.
Read more
22 Sep 2022